Posted on 2022-06-17
Pesticide sales in Estonia reached a record high in 2021, data published by Statistics Estonia shows.In 2021, 894 tonnes of pesticides by active substance were placed on the market in Estonia. This is the largest annual sales of pesticides in Estonia over the years.Herbicides accounted for 68 percent, fungicides for 17 percent, growth regulators for 13 percent, and insecticides for less than 1 percent of the total amount of pesticides sold.A significant increase occurred in the sales of herbicides. For the second year in a row, the sales of insecticides fell by almost a half.Swen Peterson, analyst at Statistics Estonia, said that for years, various herbicides have been the most sold plant protection products. 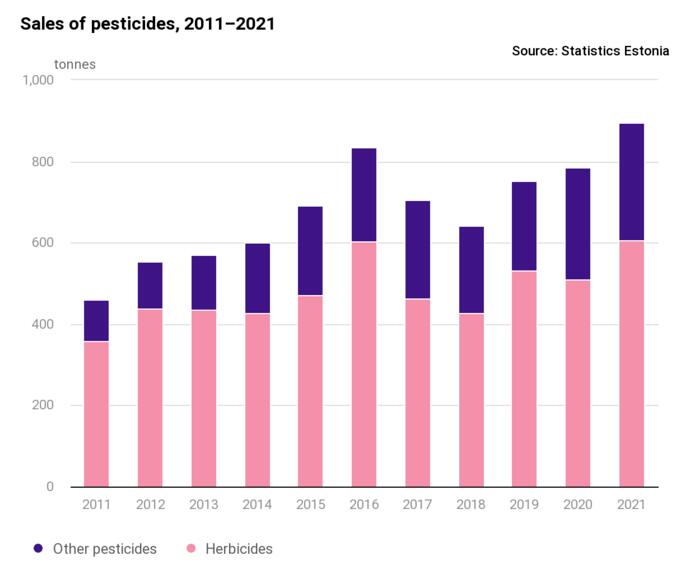 Sales of pesticides 2011-2021. Source: Statistics Estonia
"In 2021, the sales of herbicides totalled 607 tonnes, which is nearly a fifth more than in 2020. This is the highest quantity in the years under review, also breaking the previous record of 604 tonnes of herbicides sold in 2016," added Peterson.Compared to other European countries, the absolute quantities of pesticides placed on the market in Estonia are relatively small and totaled 765 tonnes last year.In 2020, the quantities of the three major types of pesticides sold were 66,000 tonnes in Spain, 61,000 tonnes in France, and 46,000 tonnes in Italy.Pesticides are used in agriculture, forestry, wood processing industry, road and railway maintenance, sports grounds and playgrounds, and parks.
Source: ERR News
Inquiry Top